Skip to content
Matt Uncategorized January 8, 2015February 20, 2015 2 Minutes
Growing up, I had the covetous characteristic of having an extremely fast metabolism.  When I was young, I recognized only that this made me extremely skinny.  Most adults must have thought that it was OK to be blunt with kids because I would constantly hear phrases like “My, you’re skinny! Take an extra pudding,” “Don’t your parents feed you?,” and “Whoa! Watch out where you put those boats (in response to my pediatrician tripping over my shoes (I was probably the only 12 year old to have shoes the same size as his age)) (on an unrelated note, I didn’t realize you outgrew a pediatrician until watching that episode of Friends).”
As a teenager, I would unknowingly use this skill to indulge myself in the wonderful world of food.  While traveling back east we stopped at Denny’s which happened to serve a 6 lb. hamburger.  I regret that I did not eat the whole thing, but instead split it with two friends.  But STILL, two pounds is still admirable right? 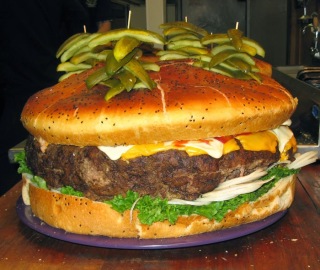 Did you ever watch the film Matilda and wish that the chocolate cake that Bruce Bogtrotter victoriously finishes was real?  Well look no farther because you can find it right at your local Costco, better known as the All American Chocolate Cake: 7 ½ pounds of rich, chocolaty goodness, or so we thought when we bought it at the age of 17 and thought to eat it in one sitting.  2 gallons of milk and watching the whole Star Wars prequel trilogy later, we finished that cake.  Did we feel accomplished? Yes.  Did we feel absolutely terrible inside? Absolutely.  But it was one of those things that “hurts so good!”  Needless to say, there is no way we could do the same thing.  We’d be better off taking a syringe of lard directly to the thigh.

As I’ve grown up, I realized that I hit my peak performance as a teenager (going to the Philippines, getting worms and dengue, and losing 30 lbs. didn’t help).  Some people measure performance in terms of “athleticism” and “fitness.”  I say it’s up for interpretation.  I can still eat a lot, except now, I sometimes experience “eater’s remorse (it’s a thing).  You’ll understand if you’ve ever eaten at Beto’s.  My mother’s words to me as a child are starting to become clearer: “You’ll regret this when you’re older.”
I’m still skinny and lanky (as the lunch ladies used to say), but at least now people don’t mistake my ribs for abs (unfortunately).  I actually have to prepare myself before big eats.  But if you ever want to do the following local challenges with me (perhaps even split one), please let me know.
5 lb. burrito at Brassas Mexican Grill
3 lb. Burger (w/ 1 lb. fries) at Fuddruckers on Fat Thursday
The Filthy Forty at Buffalo Wild Wings
The Kitchen Sink at Angie’s in Logan
5 lb. Calzone at The Pomaroy
29 in. Pizza at the Brick Oven
Also, if it’s your birthday, did you know you can pretty much get a free month of food by hitting up enough restaraunts (and having enough friends willing to go with you to get the BOGO deals)?  Here are a few:
BOGO at Tucahnos (Go right before their dinner menu starts to get the lunch price and dinner foods)
BOGO at Benihana’s Japanese Grill
Free Burger at Red Robin
Free Ice at Rita’s
Free Grand Slam at Denny’s (Day of Only)
Free Shake at Del Taco
Free Firehouse Sub
Free Ice Cream at Coldstone
BOGO at Dickey’s BBQ
Free meal at IHOP
Most places do desserts and appetizers but please, go big or go home.