I didn’t grow up in a household that watched sports.  That’s not to say we didn’t associate with sports.  I did the rotational thing most parents do with their kids as they sign them up for every seasonal sport to find out which one they excel at (for me, it was none of them).  Me and dad would even occasionally go out back and throw the ole’ pigskin around (sorry, back then we still called it a football).  But as far as watching sports went and knowing individual teams, that didn’t happen.  This could have been that besides the Jazz, Utah didn’t have a professional sports team to cheer for (growing up not knowing about the Jazz was too bad since the 90’s were probably their best years with Stockton and Malone, now all that’s left of those players are car dealerships named after them).

A few year’s ago, Utah got a professional soccer team – Real Salt Lake – which is actually pretty good.  But unless you grew up playing soccer, are a die-hard fanboy, or are from anywhere in the world outside the United States, you can’t really say you’re a soccer fan.  But don’t be fooled every 4 years when the World Cup comes around, every American suddenly becomes soccer fans and it’s all anyone talks about.  It all blows over about a week after it finishes (or when America loses), and not even Tim Howard can stop that. 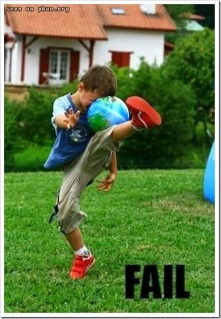 There are other sports teams in Utah of course, the kind you got tickets to for getting gold stars in elementary school: the Utah Blaze, Salt Lake Buzz/Stingers/Bees, and the Utah Grizzlies.  Who are they?  It doesn’t matter, let’s move on.

My first and biggest exposure to sports growing up was probably from NFL Blitz on the Nintendo 64.  Along with Goldeneye and Super Smash Bros., this game stands out as a classic, not only because of its high entertainment value, but also its educational value.

I didn’t gain exposure to many teams since I always chose the Buccaneers (I liked pirates you see).  As I grew up more and watched real football, I began to realize that Blitz wasn’t as informative as I thought.  For instance:

One of my favorite shows is Scrubs (excluding season 9), due to how closely I relate with JD.  One of the running gags is his apathy for sports.  The following clip is pretty much my approach (a bit of language):

Then when I try and talk sports with other people, I mix things up and end up feeling silly:

So now I just learn to keep it to myself.

If the occasion calls for it, I’ll go to someone’s place and watch the big game.  My reaction time is usually a second after everyone else has responded to a call so I can respond accordingly for not knowing what happened.  Odds are though, while everyone is yelling at the TV, I’ll be in the kitchen like “hey, what kind of wings are these?”