Please keep in mind that this blog is written as an outlet of satire and humor. My experiences presented here are insignificant when compared to those who were in the direct path of Hurricane Harvey.

Eager to let Bobcat take the sideline in this part of the story, I made my escape from the car which had been my all-encompassing prison for the past 3 hours. Ingleside is a sleepy coastal town just under 10,000 people. Nearly two weeks after Hurricane Harvey, debris litters the side of the road, half-destroyed buildings stand, mangled and deserted, and residents are out early on this Saturday morning, doing what they can to assist in cleanup.  Speaking with many of the residents, it is apparent that their incomes are fixed, many have no insurance, and it will be months before FEMA offers any assistance, if at all.

We pull up to our job for the day and introduce ourselves to the homeowner. Our job for the day is as the “muck-out” crew – a term I originally thought to be made up, but really means “the strangers who are here to gut your house and then leave as fast as we arrived.” She takes us inside her house and immediately a musty smell fills the air. It is a small house, but every room had been flooded during the storm and is now showing remnants in the form of thick mold spreading up the walls.

As our eyes moved up from the floor, we see that the ceiling is in the same state. Black and green blotches cover the once-white plywood ceiling. Realizing I am about to fulfill my childhood “Extreme Makeover: Home Edition” dream of being able to demolish a home, I ecstatically put a glove on and punched the wall to kick off our day of service. A sudden throbbing sensation in my hand and realization that I just punched a stud causes me to grab a crowbar instead and throw it at the wall in anger. Not wanting my enthusiasm to diminish, I quickly grab the nearest tool, wincingly yell “yeeeeeaaaah!” and get to work.

We begin working on the walls first. With a combination of crowbars and power-saws, drywall and insulation begins to litter the ground and a few people are assigned a wheelbarrow to carry it out and dump it in the front yard. As I begin working on a sidewall that connects to another room, I faintly hear people in the other room discussing a particularly difficult portion of the wall. At that moment, I am bending down next to the wall to remove some lower insulation. I suddenly hear Bobcat yell out “WATCH OUT I’LL DO IT!” Without warning, a crowbar bursts from the wall to the left of me, inches from my head.

I slowly turn my head and look at the crowbar as I hear Bobcat grunting and struggle to pull it out, not having contributed to the solution of the wall. I half expect him to stick his head out from behind the wall and with a menacing grin on his face, yell “Heeeeeeere’s Bobcat!” I walk to the other room and talk about safety first, common sense, and assign him a broom instead.

As we get to work on the ceiling, I developed a strategy for removing the panels. I would use the crowbar to begin creating large, square-shapes in the panels, and when three sides had been completed, the panel would easily come away by pulling it down on the fourth, unfinished side. About an hour into working on the ceiling, I am nearly through cutting through the third side when the entire ceiling comes down unexpectedly on top of me.

Now normally, if a big piece of plywood comes down on your head, you’d call it a day and go get an x-ray. But since this piece was saturated with mold, it merely broke to pieces over my head. However, I quickly discovered the reason it collapsed was that water from the hurricane had been trapped in the ceiling and made its way into the insulation. Furthermore, this area was where a number of large cockroaches had decided to nest.

So allow me to paint you a picture with my imagination brush of the situation. I have a moldy ceiling break apart on my head while 2-week old standing water pours down on top of me with waterlogged and moldy insulation. Due to my intrusiveness, the serenity of what was once the home of a happy cluster of cockroaches has been destroyed as they come crashing down above me in a torrential downpour of filth. In their confusion, they crawl in fury over the first thing they can find, which happens to be my body. 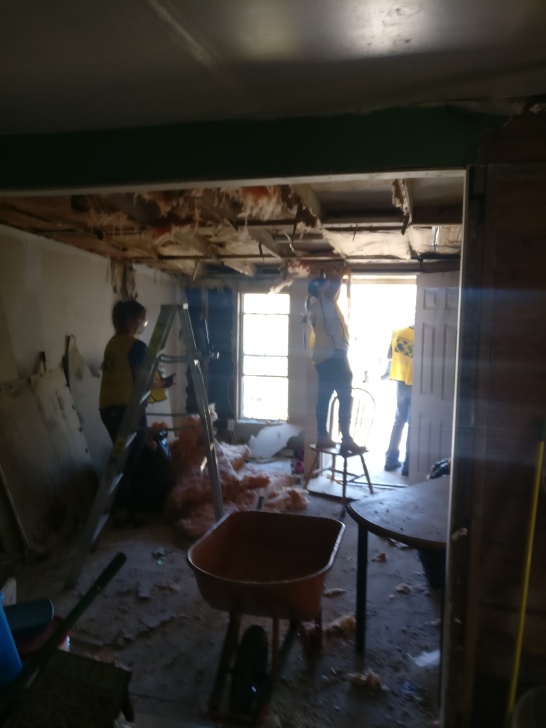 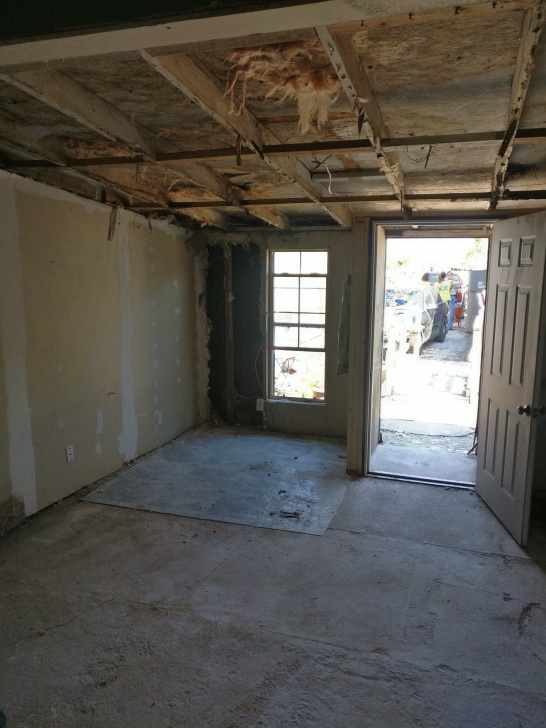 The rest of the day went by rather uneventfully, except most people kept a greater distance from me than before. But by the end of the day, everyone had the same dank stench with a thin layer of dust and mold covering their clothing. 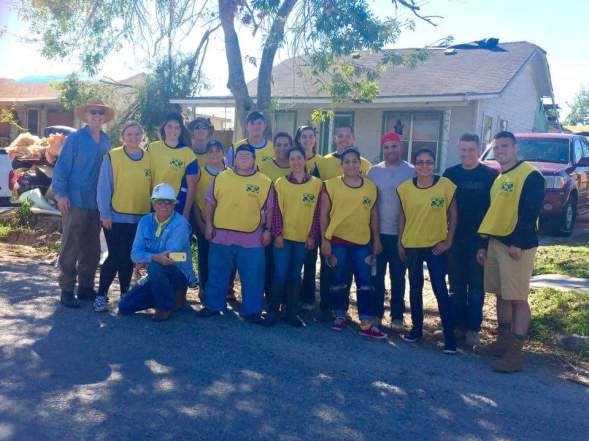 When we finished, we gathered outside by the cars. I took my shoes off to remove my socks and burn them. I put my chacos on and not 2 minutes later was stung by a bee on both feet. I was ready to head home. As I climbed in the car, I apprehensively opened my book and found my place:

Do you want us all to die?

I wanted to believe the car ride home would be better than the car ride here, but that was just me being naive. How could I have known that it was going to be worse. So much worse. 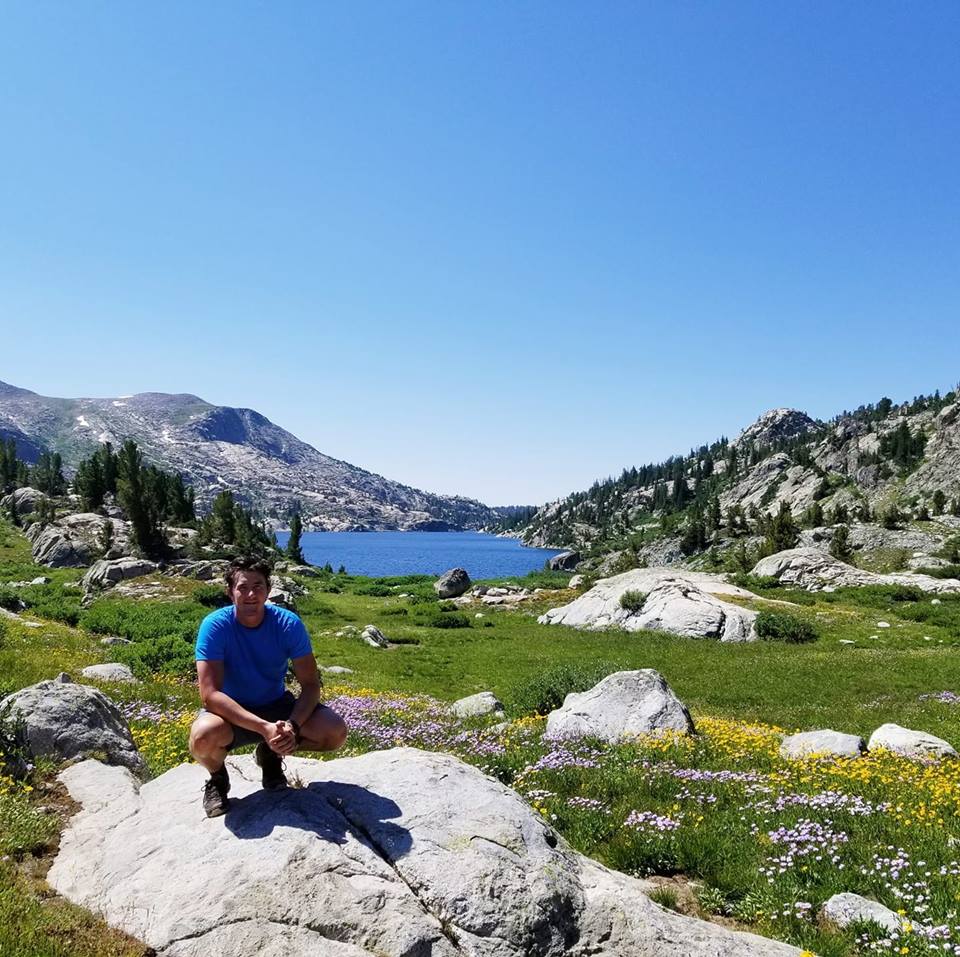