If you’ve stuck with me long enough to make it to the final installment of this series, my hat is off to you. I truly hope you can find a better way to fill your time now that this journey is over.

When our group separated back in Budapest, Seth, Jared and I continued onward to Milan, Italy. Seth had served a church mission in Italy and was familiar with the language, so this would be the first time on our trip that we would actually know when we were being swindled or locals were talking about us behind our backs (or rather right in front of us).

“But Matt, you visited London and they speak English!”

I never mentioned the many times London locals talked to me and I had no idea what came out of their mouth. So I would usually just stare vacantly at them while saying yes to whatever they said. This is how I ended up buying a 4£ beer at a restaurant. I don’t even drink. But at least 10% of that purchase went towards saving the rain forest.

Back in Italy, we arrived on Saturday around 4 pm and due to our scrupulous attempts to remain cheap, our budget airline flew into a city called Bergamo, a secondary airport about an hour outside Milan. This is a fact we weren’t aware of till we arrived at the airport. So after an hour in a bus, we pulled into the Milan station and set off towards our Airbnb.

The thing about airbnb is that sometimes you really don’t know what you’re getting until you arrive. Our host was a new host and didn’t have any reviews yet. Additionally, I hadn’t booked it and therefore hadn’t looked into it very much. When our host answered the door, I noticed 2 things:

So many senses being assaulted all at once. A lovely couple though. I snap out of my daze and we head upstairs to drop off our things.

We head back outside and since Seth knows where he’s going, he takes us the the city

center via the metro. As we walk up the stairs, the monstrosity that is the Duomo looms right in front of us. This is a beautiful structure truly magnificent to see for the first time. We head towards the line to go inside and notice a sign that says admission is 10€. At this point, I’m done paying admission prices for churches that all start to look the same after a while. I notice another line entering inside for free and realize it’s for people wanting to go inside and pray. Quickly making a decision between me and the Big Guy, we join that line under the judgemental eyes of the guards there who know exactly what we’re doing.

Before you pass judgement and in my defense, I did say a prayer inside. So….I think I’m good.

Around the corner from the Duomo, I experience another assault of the senses in the best way possible. There is a steady line of people outside a small restaurant called Luini. The best way to describe this inexpensive, yet delicious food is a deep-fried pizza doughnut. They are essentially small hand pies filled with salami, mozzarella, tomatoes, and whatever you find on a pizza. 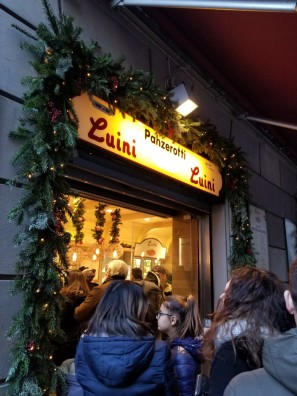 That sounds like a Hot Pocket you say? How dare you.

When we finish with our hand pies, directly across the street was a gelato shop called cioccolat italiani. You could tell they serve real gelato because the name was in Italian. Also because it was in Italy.

After walking around for a bit longer, we headed back to the smoke house since we all had an early morning ahead of us. Seth and Jared were taking an early plane back home. My flight wasn’t until later that night, so I would be taking train out to the small town of Como and taking a ferry to Bellagio based off the recommendation of a good friend:

Lake Como and Bellagio is one of the most beautiful and romantic places in Europe, you have to go!

“That sounds like just the place I want to go by myself,” I thought to myself. The last time I traveled by myself in Thailand, people kept trying to sell me Armani suits, massages, and services in the red light district. Maybe this time will be different. I may be lonely and all alone, but at least I won’t be out $100 for a suit I never received.

After saying goodbye to Seth and Jared at Milano Centrale, I boarded my train for the 45 minute journey North. I was on a tight schedule if I wanted to catch the 2 hr ferry ride to Bellagio and back, catch the train back to Milan and catch my plane to London at 5 pm.

Divine intervention had other plans for me that day. The train to Como ended up getting delayed at a station for 45 minutes, throwing off the rest of my schedule. I determined that I wouldn’t have time to take the ferry across the water to Bellagio. Since today was Sunday, I felt that I should look up a local LDS chapel to attend. By Divine design, there was a chapel in Como with services beginning about the time I was set to pull into the station. I sure didn’t look like I was set to go to church, I was wearing my travel pants, a flannel shirt, and I hadn’t shaved in 2 weeks.

I didn’t know anyone there, but I was quickly approached and ushered to the middle of a row. I smiled because of the feeling of familiarity I was experiencing. In a worldwide church, everything is the same, including the WiFi password which my phone had automatically connected to. The services were in Italian so I didn’t understand anything, which was fine. After the services, the American missionaries came up to me, obviously hoping that this “bum” from the street was their next golden investigator. They started talking to me in broken Italian, to which I responded in French:

They stopped talking, taken aback, and responded with “uh…no.” We stood there a few more seconds in silence. I broke the silence by laughing and saying “Elders, I’m from Utah, see ya!” And left to go see the rest of Como.

The church was situated above the lake in a small area of Como, away from the more touristy area down by the marina. Rather than take a bus, I decided to walk the 2 miles down to the lake. It was a sunny, yet frosty Sunday morning as I walked in silence on the windy, mountainous road through the small Italian village. As I stared in awe at the beautiful landscape before me, a flood of thoughts ran through my mind as I pondered on my existence and meaning in life. Rather than quote the various lines of Muir, Thoreau, or other poets whose lines appear amidst the background of a piece of scenery on motivational posters and Pinterest boards which might have been appropriate for the situation, I’ll just say it was a nice moment.

Outside of tourist season, the only people in town appeared to be mostly locals walking their dogs or spending time with their partners. And then there was me with my oversized duffel, disheveled look, unkempt hair, and khakis. Alone. They’d glance at me as I passed and smile, but internally, were they screaming “you’re destroying our property values American bum, get outta here!” But in Italian. And with their internal hand shaking at me with their fingers pressed to their thumb.

I boarded the train back to Milan, stopped at Luinis, again and caught my plane to London, arriving at 6 pm. Unfortunately, my plane back to the states wasn’t until 9 am the next morning, so I’d be spending the night at Heathrow airport.

But that’s another story for another segment about spending the night in sketchy, international airports (and Detroit).

Three months later and this finally concludes my visit to Europe. I enjoy traveling, so if you ever want any tips or advice, feel free to reach out.

There was an error retrieving images from Instagram. An attempt will be remade in a few minutes.